Just how much has Warren County changed in 159 years?

On a map today, we might see interstate highways, large urban centers, and various other indicators of modern life.  While cities and modes of transportation can be found on most county maps, they will look much different on a map from over 100 years ago.  The 1856 map of Warren County is a great example of community growth and infrastructure development, just over 50 years after the county was established in 1803.  This map shows the numerous canals and railroads running through the county, some of which became very important modes of transportation in Southwest Ohio. It also shows which cities were present in 1856, many of which still stand today and have been flourishing ever since. Compare the 1856 map of Warren County to the current map below.  What else has changed or developed overtime?  Let us know what you think in the comment section!

A scalable 1856 digital map can be found on the Library of Congress website.

A modern map of Warren County

You can find county and township maps, detailed blueprints, and more information on county development at the Records Center & Archives.

Trivia Question:  What three different tracks of land formed the territory that became Warren County?  The answer will be revealed next post!

Let’s Go To The Fair!

How did the Warren County fair come to be?

In 1852 the society leased 10 acres of land from Robert G. Corwin, Esq. for fair purposes.  An admission fee of 15 cents was charged for all persons not members of the society. The first fair on these grounds, which constitute a part of the present fair grounds, was held on September 22 and 23, 1852.

The original Society had 214 members, which was one of the largest in the State at the time. Ezra Carpenter of Clarksville, the first president, disclosed that the first fair met the guidelines that had been set by the officers and members.  In 1858, the society reported a membership of 1,300, 22 acres of ground, leased for 7 years, with improvements thereon worth about $2,000.  At the fair of 1857, $800 was awarded in premiums, the largest of which was $30 for the best-conducted experiment on 1/8 of an acre of Chinese sugar-cane, with the product in sugar or molasses.

In 1872 the society owned 30 acres and continued to build up the fairgrounds. Fairs have been held every year since the organization of the Warren County Agricultural Society, except for 2 years while the Civil War was in progress.  The 2015 Warren County Fair has already begun and will end on July 25.  For more information about the fair, visit the Warren County Fairgrounds website. 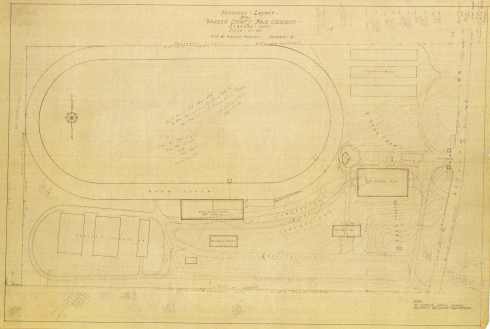 A Proposed Layout of the Warren County Fairgrounds, March 26, 1904.

In February 1941, the Warren County Commissioners planned for a new grand stand at the Fairgrounds.

An article about the fair from The Western Star Newspaper, September 27, 1900.

Trivia Question: What group was barred by law from competing for premiums in the 1st Warren County fair?  The answer will be revealed next post!

Who was Francis Dunlevy and why was he important? 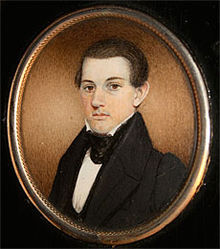 Francis Dunlevy was a distinguished pioneer born in Winchester, Virginia on December 31, 1761.  The eldest of four, Dunlevy moved with his family to Catfish, Pennsylvania in 1772. He then volunteered in the military as a private in 1776 before he was fifteen years old.  He served at least eight different times against various Indian groups before turning twenty-one, tending to his studies when he could.  After the Revolutionary War, Dunlevy went to Dickinson College where he studied to become a Presbyterian minister.  He soon changed his religious views, identifying more with the Baptist church and gave up religious studies to become a teacher.  Dunlevy moved with family again to Washington, Kentucky in 1790, eventually making his way to Butler County, Ohio in 1792 where he opened a classical school and married Mary Craig.  He moved the school to Lebanon in 1797 and continued it until 1801, becoming the first teacher of ancient languages in the Miami Valley.  In an attempt at public office, he lost his first special election for a seat in the Northwest Territory Legislature in 1799 to Isaac Martin.  Dunlevy was successfully elected as one of seven representatives from Hamilton County and served in the Territorial Legislature in 1801.  In 1802, he was elected as a member of the Constitutional Convention.  Born in a slave state, Dunlevy witnessed the evils of slavery in Virginia and voted against every attempt to allow it in Ohio’s first constitution.   He even took it one step further and was in favor of equal political rights for all men, regardless of color.  At Ohio’s first election, Dunlevy was elected a member of the Senate in the Legislature.  Before adjournment, this body selected him as one of three President Judges of the Court of Common Pleas for two consecutive terms where he oversaw the Southwestern circuit made up of ten counties.  At the close of his second term, Dunlevy felt compelled to practice law to help support his large family.  He persisted tirelessly in his legal pursuits and attended the courts of several surrounding counties, becoming the first judge of Warren County.  After 50 years of labor as a pioneer, soldier, teacher, legislator, framer of a State Constitution, lawyer, and Judge, Dunlevy retired at the age of seventy.  He died October 6, 1839 at 78 years old and is buried at the old Baptist Cemetary in Lebanon.

Excerpt: Common Pleas State Record “A.” May Term 1807. State of Ohio vs. Joseph Little & Jonathan Cone. Warren County, Ohio. Pages 102-103.
“Pleas held for the County of Warren within the State of Ohio on the third Tuesday of May in the year of our Lord one thousand eight hundred and seven before the Honorable Francis Dunlevy Esquire Presiding Judge of the Court of Common Pleas for the first circuit and Jacob D. Lowe, Ignatius Brown, and Peter Burr, Esquire associate judges assigned to keep the peace in and for said county and also to hear and determine (diverse) felonies, trespasses, and other misdemeanors committed in the same county.”

Trivia Question: Who was the famous Indian that Francis Dunlevy encountered at the Battle of Sandusky?  The answer will be revealed next post!

Do you know what it takes to become a citizen of the United States of America? How about when the county was young and immigration was essential in developing settlements?

Many of Warren County’s early settlers had to fill out official paperwork concerning naturalization and becoming a United States citizen. Naturalization in America dates back to the 18th century with the Naturalization Act of 1790, stating that those who had resided in the country for two years and had kept their current state of residence for one year could apply for citizenship. A number of naturalization acts followed, increasing residence requirements from 2 years to 14. The Naturalization Laws of the 19th century helped both hinder and advance certain immigrant groups. Children of immigrants born in the United States were now protected by the 14th Amendment and African Americans were included in 1870, while Chinese Americans were limited by the Chinese Exclusion Act of 1882. Immigration laws were reformed numerous times in the 20th and 21st centuries, mainly due to international relations and perceived threat.

We all learned about Ellis Island and immigration influx in grade school, but rarely follow up with what happened once settlers ventured westward. The Naturalization Records at the Warren County Records Center & Archives show who came to the county and from where, how they made their journey, and their reasons and intentions. These records date back to 1848, just 45 years after the county was officially formed! Most naturalization records come in three parts: the Declaration of Intention, the Petition for Naturalization, and the Final Papers or a certificate granting citizenship. Citizens that arrived in the United States after 1906 were also immediately issued a Certificate of Arrival at the port in which they entered the United States. Before 1906, an immigrant could be naturalized in any court of record. They typically began the citizenship process by taking out papers in the county where they first arrived. For example, an immigrant may have started out in New York City and then completed county papers once final residency was established somewhere else, like Warren County. After 1906, the courts forwarded copies of naturalizations to the Immigration and Naturalization Service (INS).

Christian Staley, a German immigrant, was enlisted in the 8th Regiment of the United States Infantry around May 12, 1848 until he was honorably discharged on September 28, 1848. Because of his military service, Christian was not required to produce a certificate to become fully naturalized. He fought for his new country and was not officially naturalized until 1880. 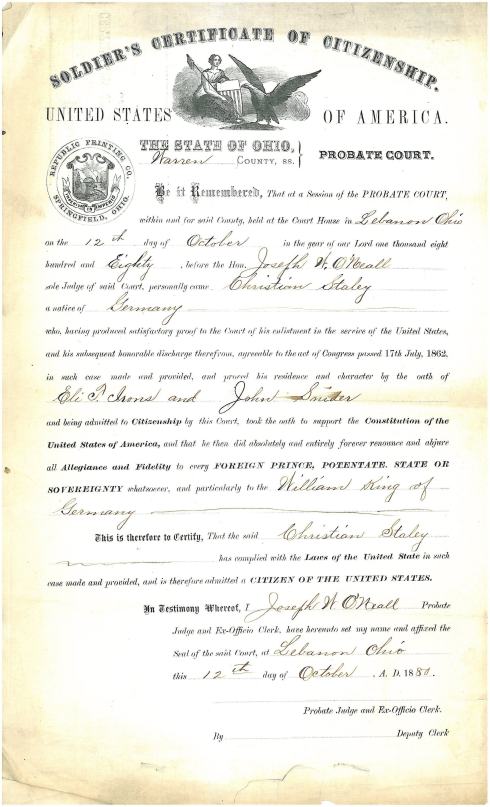 Christian was given the Soldier’s Certificate of Citizenship, showing he was a soldier before obtaining full citizenship. This record shows he is an official citizen of the United States and is dated the same date as his other naturalization paperwork.

Marion Davis was born in Belmont County, Ohio in 1869, but immigrated from Wilcox, Providence of Saskatchewan, Canada. He entered the United States in Portal, North Dakota in 1911 by train and settled in Mason, Ohio. 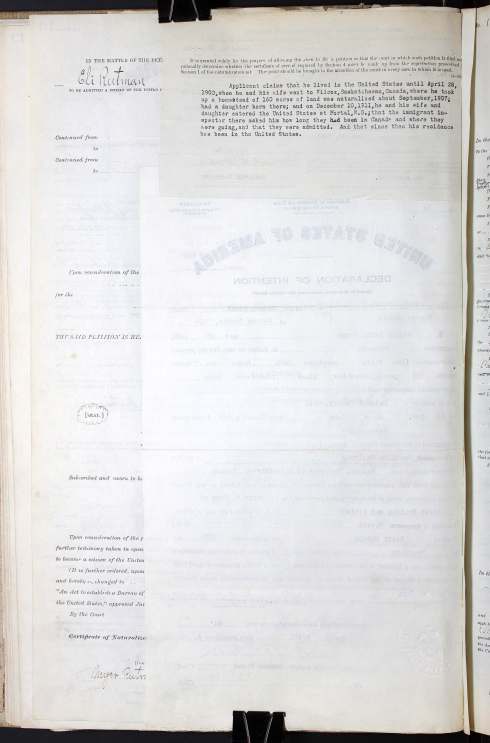 The statement on the back of Marion’s certificate says that he claims he lived in the United States before moving to Canada with his wife in 1903. They bought a farm and had a child before returning to the states in 1911.

Marion’s petition above states that he has no children, but the back of his certificate says he had one child with his wife in Canada. This may mean that his child passed away, did not make it to the settlement with Marion, or was not properly documented.

Trivia Question: What 20th century event caused immigration to the United States to decrease under President Franklin D. Roosevelt?  The answer will be revealed next post!

The Warren County Records Center & Archives welcomes you to its first blog!  The purpose of this blog is to disseminate information about the center’s events, research, projects, outreach initiatives, findings, news, and information to the residents, corporate citizens, guests, and fans of Warren County.  On this page, you will see the latest updates and findings from the center.  Please utilize the content pages above to find out more about the records center, our educational outreach program, new exhibits, and our Social Media Policy.  Follow us on Facebook and visit our website for more information.  We are excited to share our work with you!